In the Kitchen with JennyPennyAho: Shrimp Scampi 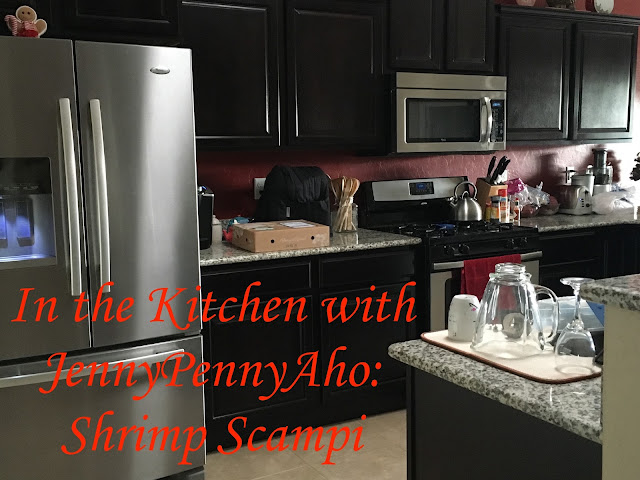 When we lived in the communal house for eleven months, we did a lot of quick and "as healthy as possible" meals.  We were limited to one bin in the fridge and one bin in the freezer for our cold items, as well as a small pantry (18" x 12").  So....imagine keeping all of your cold grocery items in one crisper drawer of your fridge, because that's exactly the size we were stuck with for eleven months!  It's tough, but we made work and had some pretty tasty meals in the process.
I bought the Weight Watchers New Complete Cookbook years ago and have a couple of entree's I make including shrimp scampi & beef and broccoli stir fry!  To make the shrimp scampi, I tend to keep frozen wild caught shrimp in our freezer (~$14/pound) and always have thin spaghetti on hand.  Two fresh items are: lemons & parsley (I just used dried parsley). You can choose to use fresh lemons or the prepackaged lemon juice at the grocer (I've done both variations, but prefer to use fresh organic lemons if possible).  Whatever lemons I don't use and they start to turn bad, I cut them up and toss them down the sink drain and turn on the garbage disposal to freshen up our sink drain.  Works like a charm and if you ask me, it works better than baking soda and vinegar!

As a blogger, I love reading recipes on fellow blogger sites.  I have actually saved a few and use them all the time. However, I despise having to piecemeal the recipe items into a grocery list because the blogger 1) hasn't provided a list up front 2) separated it it by pictures and explanations! I didn't want to frustrate anyone reading my blog, so I've provided a recipe/grocery list below and also provided step-by-step directions with pictures.  :)

So without further a-do, here's the Shrimp Scampi recipe I use at least twice a month
(recipe cred:  Weight Watchers New Complete Cookbook (2006)): 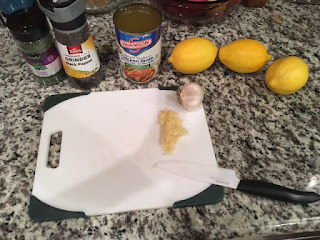 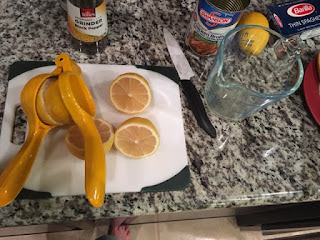 2) Cut lemons in half and squeeze the juice into a cup.  I bought this nifty lemon press (?) for less than $10 at the grocery store.  I use it all the time, so it was worth it.  Before I owned it, i just squeeze the best I could and then had my husband squeeze some more just to make sure I got all of it. :)

4) Then, add the EVOO to the frying pan (I use a deeper frying pan) and let it warm up on medium heat.

5) Toss frozen shrimp into the frying pan with the EVOO. Cook until pink.  My grocer sells these: 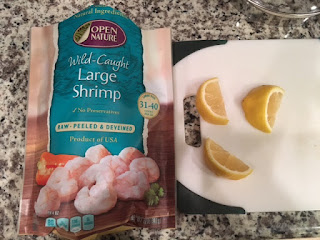 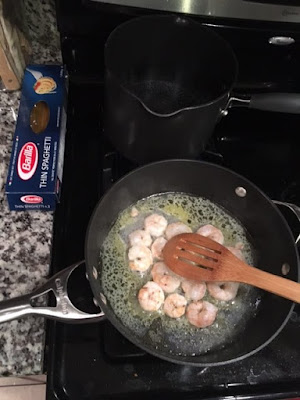 6) Once pink, use a slotted spoon to remove the shrimp to plate (keep them hot because you will add them on top of the noodles shortly). 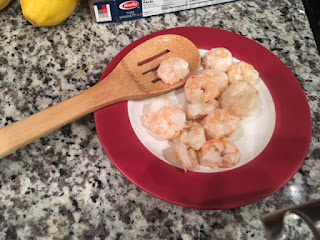 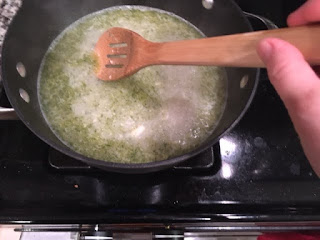 6) In the frying pan, combine the lemon juice, chicken broth, parsley, salt, pepper and bring to a boil and continue to boil uncovered until the sauce is reduced by half. 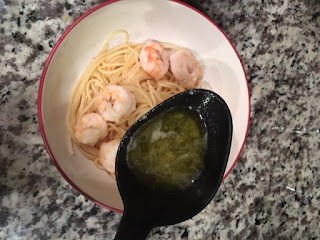 7) Fork a serving size of cooked spaghetti noodles into a bowl, spoon a serving a shrimp over the noodles and then top with a spoonful of sauce. (I've made this recipe for years and when we made it the other night, the sauce turned out thicker than usual. It must have been my sister's special touch because I don't have any other explanation for it. It was just as delicious as usual!)


8) If I have an extra lemon, I garnish the dish with a slice of lemon, but it's completely up to you! 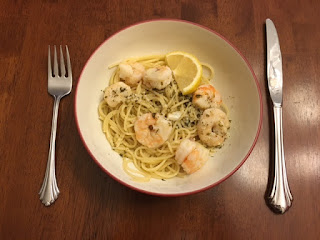 I hope you enjoy this quick and easy meal as much as my husband and I do!
Thanks for stopping by JennyPennyAho!
spiritsandeats

For over a month, Seth asked me what I wanted for my birthday and Christmas.  I'm a capricorn aka a "Christmas baby," born only three days before Christmas. This year, I couldn't think of anything I wanted or even needed.  After all of the craziness this past year, I was just thrilled to be home  spending my birthday and the holiday's together. You know the saying that giving is the best gift?  Well, I was daydreaming one day and realized that I just wanted to express my love and commitment to the man I married five years ago -- and a vow renewal was what needed to happen!  So, I spoke with one of the Pastor's at the our church and he informed me the end of December should work for their schedule and to contact the admin office.  Then, I contacted Stephanie at S.Strine Photography and we set the date for 12.28.2015! In 2010, our wedding was planned 1,700 miles away and none of the churches I contacted would allow us to use their sanctuary to get marrie

Three days ago, I started my new job at the local university!  Before heading off to work on my first day, I asked Seth to "document" my first day of my new career with a photo. (I've traded in my scrubs for business casual! Woo hoo!) I just finished my third day and couldn't believe 10 hours flew by.  I am excited to begin co-teaching a 16-week course this Saturday AND I found out today that I will be instructing an 8-week course starting mid-October as well as, developing a new course! Eeeek! This evening, I left work with a headache thinking about everything I need to do this semester, but I know that grad school prepared me for this and I know I CAN do this and I WILL succeed. :) For educators and others who have ongoing tasks -- how do you organize your enormous list of tasks?

Doing Something for Myself {& My Family}

05/2015 Our trip to Delaware included a pit stop at King's Homemade Ice Cream in Lewes. Photo credit: JennyPennyAho    Experienced educators have told me that I need to "give it a year, the first year of teaching is the hardest, but it gets better."  Well, I gave it two semesters (almost) and I have decided full-time teaching is not in the cards for me right now.  I submitted my resignation in late March.  I will finish up the semester and a couple of projects I've been assigned and then I will leave my position at the college at the end of May. You are probably wondering, why I am leaving after only teaching two semesters.  Well, during spring break in March, Seth and I talked until we were blue in the face and we decided it is best that I leave my full-time position and focus on our family.  I have given 110% and do a fantastic job with developing curriculum and teaching, but I care too much (is that possible?).  My answer, yes it is because it stressed me ou